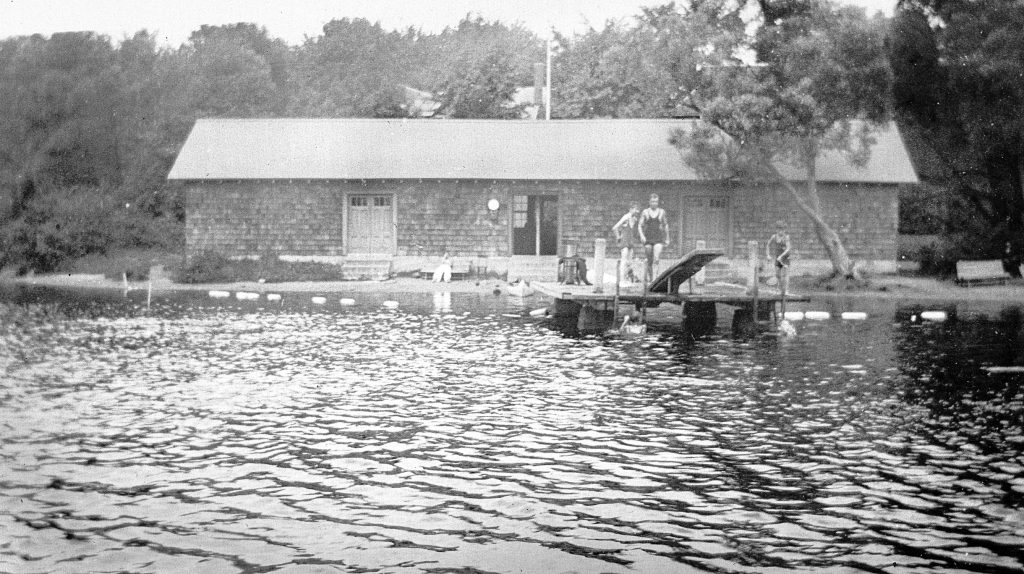 With summer heat approaching, the women of Hopedale decided to take matters into their own hands.  The town had built a new bath house on the edge of Hopedale Pond in 1904 “for the use of men and boys.”  But the ladies of town wanted a cooling dip, too, and needed a safe place to dress.  So in 1905, they demanded access.

Bathing – what today would be called swimming – became a hit during the Victorian era.  Many early beaches were separated by sex, and few people could actually swim.  That’s probably for the best as swimming costumes covered much of the body and were made out of wool.  Females in Hopedale wanted a chance to dunk themselves in the cooling waters of the pond, but without a place to change enjoying that summer pastime was impossible.

The bath house was built five years after the formation of the town’s park commission, and had an inauspicious start.  According to the blueprints of Boston architectural firm Chapman and Frazer, the plan was to tear down Henry Patrick’s ice house and re-use the wood for the framing and rafters.  Unfortunately, the ice house caught fire during demolition, “burning so rapidly as to endanger the men on the roof, and also preventing the removal of tools and implements stored therein.”  With no insurance, an extra $300 needed to be spent to cover the losses.  But by summer, the men and boys of town had a place to put on their itchy bathing costumes.  Almost 2,000 “baths taken and parties having baths” happened that first summer.

Hopedale built the bath house in part to stem the tide of male skinny dipping and spare the sensibilities of local ladies.  The town encouraged residents to bathe in front of the bath house in order to keep them in their suits, but it was a losing battle.  “No person in a state of nudity shall bathe in any of the waters of the town between the hours of sunrise and sunset in places exposed to public view or in the vicinity of any dwelling-house,” town bylaws read.  Each scofflaw could face a $20 fine, over $500 today.

Hopedale’s elite spent their summers at seaside resorts, so this was mostly likely a middle class fight.  The women suggested female matrons be on duty to keep the bath house a secure area for changing from corsets to bathing costume.  The town relented.  “With the cooperation of ladies offering their services as matrons, we arranged for use of the bath house facilities by women and girls two afternoons each week,” park commission records for 1905 noted.  Even with the truncated schedule, 222 women participated that summer – and the town didn’t even let them swim until August 3, with the season nearly over.

A decade later, about 1,000 females were using the bath house facilities each summer, compared to about 5,000 males.  “There are times when our facilities are overtaxed, but as a rule we can take care of all applicants,” the park commission reported.  The number of female attendees rose to over 3,000 by 1920, almost half the number of males.

The records don’t indicate when women were allowed to use the bath house full-time, but female residents began to dominate the numbers.  By the summer of 1935, when attendance topped 12,000, girls swimming outnumbered boys by over 1,500.

Swimming at Hopedale Pond peaked in 1968, with over 18,000 townspeople registered – an increase, the commission noted, of 6,000 over the previous five years.  But the numbers would slowly drop, until swimming in the pond was restricted in 1997.  The town’s selectmen finally closed the town’s beach in 2003 due to funding issues and “lack of interest.”  But the bath house still stands as a reminder of a fight for the right to take a dip.