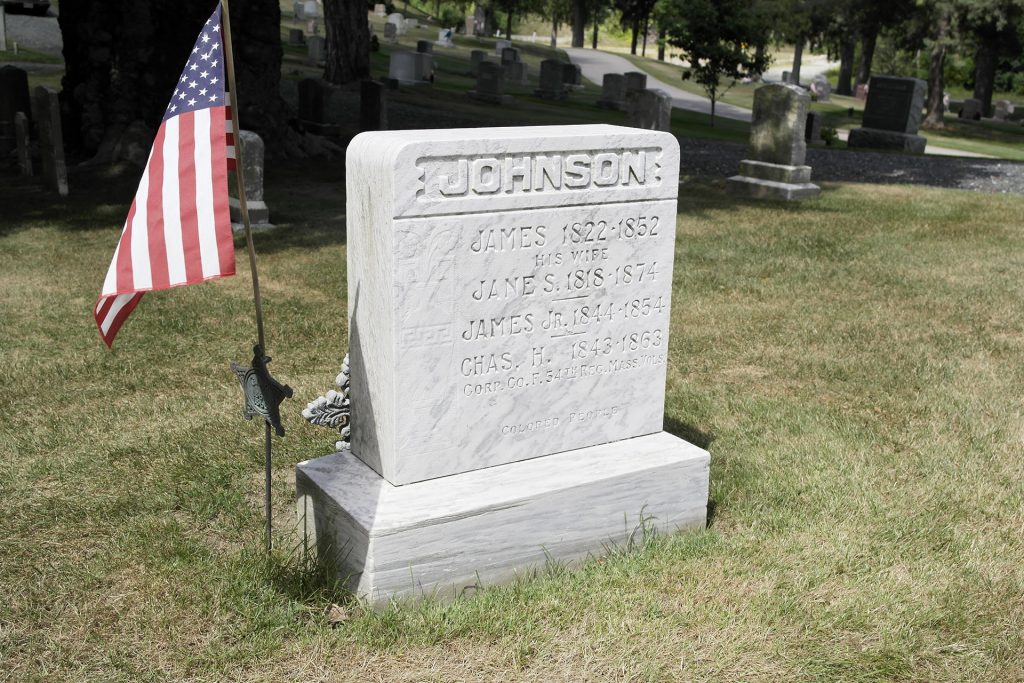 Gravestone of the Johnson Family

On May 13, 1863, Charles H. Johnson married Elisabeth Williams, a woman he’d only known for a few weeks.  Charles was living in the small town of Warren, Massachusetts, but had met Lizzie in Springfield, about 25 miles away.  Their marriage certificate attests both to be 19, but Lizzie later admitted to having lied to her husband-to-be – she was only 16 when they married.  Charles’ occupation was listed as soldier even though he was a barber by trade.  The couple had little time to be together.  His regiment, the 54th Massachusetts Volunteer Infantry Regiment, would leave for the battlefields of the Civil War before the end of the month.

Charles took part in the most important battle for a black soldier in the Union Army – the Battle of Fort Wagner, on July 18, 1863.  This was a turning point for African American troops.  “It made Fort Wagner such a name to the colored race as Bunker Hill has been for ninety years to the white Yankees,” the New York Tribune noted after the assault.  In this battle, Charles was injured and died of disease in an army hospital two months later, making the ultimate sacrifice for his country.

Charles came from a family used to hard work.  His parents, James and Jane, moved to Hopedale from Connecticut after 1850 and struggled to make ends meet.  James, a free black man, had little time to enjoy Hopedale’s progressive ideals.  He died in the summer of 1852 in Millville.  Now a single parent, Jane was forced to send Charles, her oldest son, to live with others.  She later made the decision to give up her younger son, Jimmy, and Adin Ballou used his newspaper, The Practical Christian, to try to find a home for the boy.  Ballou told his readers that James had “commended his widow and children to my protection,” adding that he had hoped eight-year-old Jimmy could stay in Hopedale, but “the prospect is discouraging.”

“A family with few children, suitable occupation, and kind, firm, steady government, would be the one for Jimmy,” Ballou wrote.  He wanted Jimmy to find a family “with whom color shall be no detriment; who will train him to industry and wholesome restraint, without harshness or degradation.”  Whether or not little Jimmy found a new home is unknown; Ballou’s funeral record shows the child died in the summer of 1854, “Drowned Bennett Hole.”  Jane spent $4.50 on a coffin made in Hopedale to bury her youngest son.

Jane moved to Western Massachusetts to be with Charles, who began recruiting in Springfield after the Emancipation Proclamation allowed African Americans to fight in the Civil War.  The Republican, a local newspaper, praised his activities in the February 21, 1863 issue.  “Charles H. Johnson, a smart young colored man from Warren, has opened a recruiting office for the colored regiment near the depot. Our ‘colored brethren’ are great at talking and praying freedom – let us see if some of them will not fight for it,” the newspaper reported.

And Charles did “fight for it.”  He had been such a good recruiter of African American soldiers that he received a promotion from Colonel Robert Gould Shaw, the leader of the 54th.  Charles was wounded at Fort Wagner, the battle memorialized in the movie Glory, and died on September 18, 1863, 155 years ago this month.  Both Lizzie and Jane were now alone.  Jane returned to Hopedale, working for the remainder of her life as a domestic servant for George and Hannah Draper.  She and her family are buried in Hopedale Village Cemetery, except for Charles.  His body remains near the hospital in South Carolina where he died.